The Sound Interface Device is the sound generator chip that was used in the Commodore 64 (C64) and various other machines by Commodore. The success of the C64 is directly related to the features of the SID that were not present in other home computers at this time. With a C64 at home suddenly everyone had the possibility to use the SID like a versatile instrument to compose own songs. Despite the limited capabilities even today new songs for the SID chip are written today. Currently the High Voltage SID Collection (HVSC) that archives known songs for the SID amounts to nearly 50.000 unique song files.
While the playback of these files requires either the transfer to or the emulation of the complete C64 a simpler way to archive the sound is a recording off a real Commodore 64. It doesn't keep the original playback code but the songs can be played on any modern device. Such source material with more creativity allows great remixes using modern technology.

The SID chip incorporated digital and analog circuity and its sound depends on the surroundings. Most important is the correct base clock, filter capacitors and output stage. A real Commodore 64 grants this environment on every physical level. While emulation of the SID chip got better it still does not cover every aspect thus emulation won't be the focus here.
First of all some general rules for sound recording apply. High quality shielded RCA connector cables should be used. As recording device an external USB sound card is recommended due to less noise and separated ground. To adjust the optimal input volume an external mixer device is mandatory. Since the output of the SID is mono a small external mixer is sufficient. Based on my experience a maximum gain setting of -6 dB is ideal. For recording the free open source software Audacity is popular and offers all the required features. My settings are 44.1 kHz rate with 32 bit float resolution in WAV format.
For playback on the C64 currently the most versatile player is the PSID-Player. The player is automatically added by the PSID64 tool that converts songs in PSID or RSID format into C64 executables. After conversion e.g. from the HVSC the file can be directly executed on a Commodore 64.

Whoever worked with a C64 knows that one can hear the computer working when the volume is increased. In addition to the internal noise also external sources contribute. It is well known that the original C64 power supply is of questionable component quality such that the use of a new modern power supply is highly recommended. An extension lead with a line filter reduces noise through the supply as well. External devices connected by the same ground also contribute to noise. A noticable source is a connected floppy disk drive that is typically powered by an own power supply. Such devices should be disconnected. There are several directly connected alternatives available like SD2IEC or 1541 Ultimate. Tests show that also the Kerberos extension module is suitable where the songs are transferred through MIDI.
Noise introduced by the video output requires also treatment. In a best case scenario the video output device gets disconnected each time a song plays however it shows that already a modern TFT induces less noise than a classic CRT screen. Often neglected is the fact that the video chip of the C64 itself generates noise just by displaying the screen and its related varying power consumption. To overcome this the PSID player allows to switch off the screen by pressing DEL. In case there is still audible noise utilizing a ground separation filter might be worth a try.
To test the amplitude of the remaining noise a simple way is recording the SID output briefly. Of course the screen should be changed to black and the output of the SID has to set active with POKE 54296,15. The waveform view in Audacity can be changed to 'Spectrogram View' where the y-axis shows the frequency, the x-axis the time and the color scale is the amplitude. By default magenta is -60 dB, dark blue -80 dB and grey -100 dB. The most prominent contribution of noise is typically at about 16 kHz that should be suppressed below -60 dB by the previously described actions. 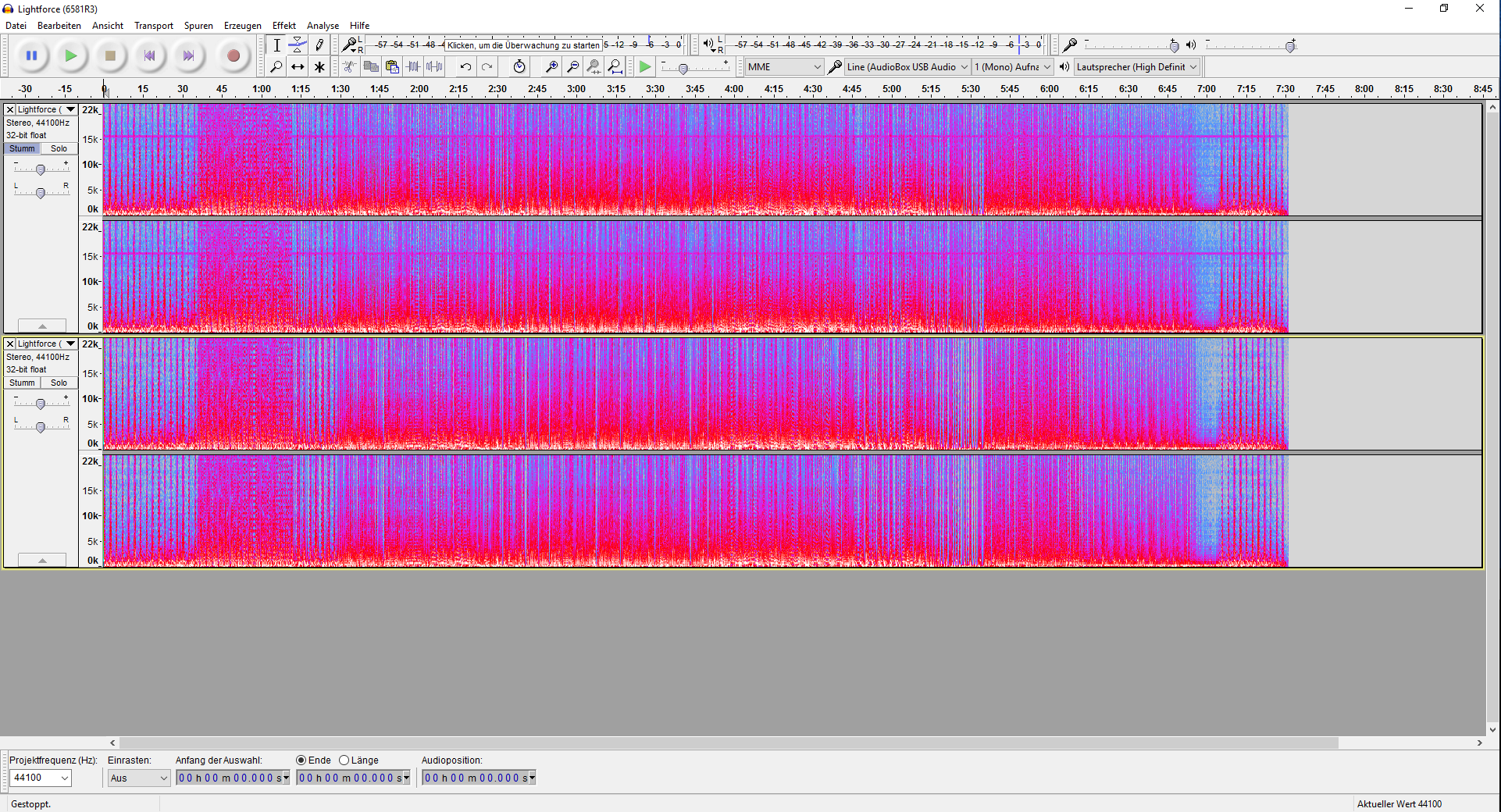 This example screenshot (click for full size) shows the spectrogram view of Audacity with four audio tracks. The first two tracks show the frequency resolved amplitudes of a recording with noise. A significant signal can be seen at 16 kHz that is permanently present the whole time. In the brief break near the end also noise structure below 16 kHz is visible. The lower two tracks show the same song recorded with all noise precautions considered. The previously described noise artifacts have nearly vanished. 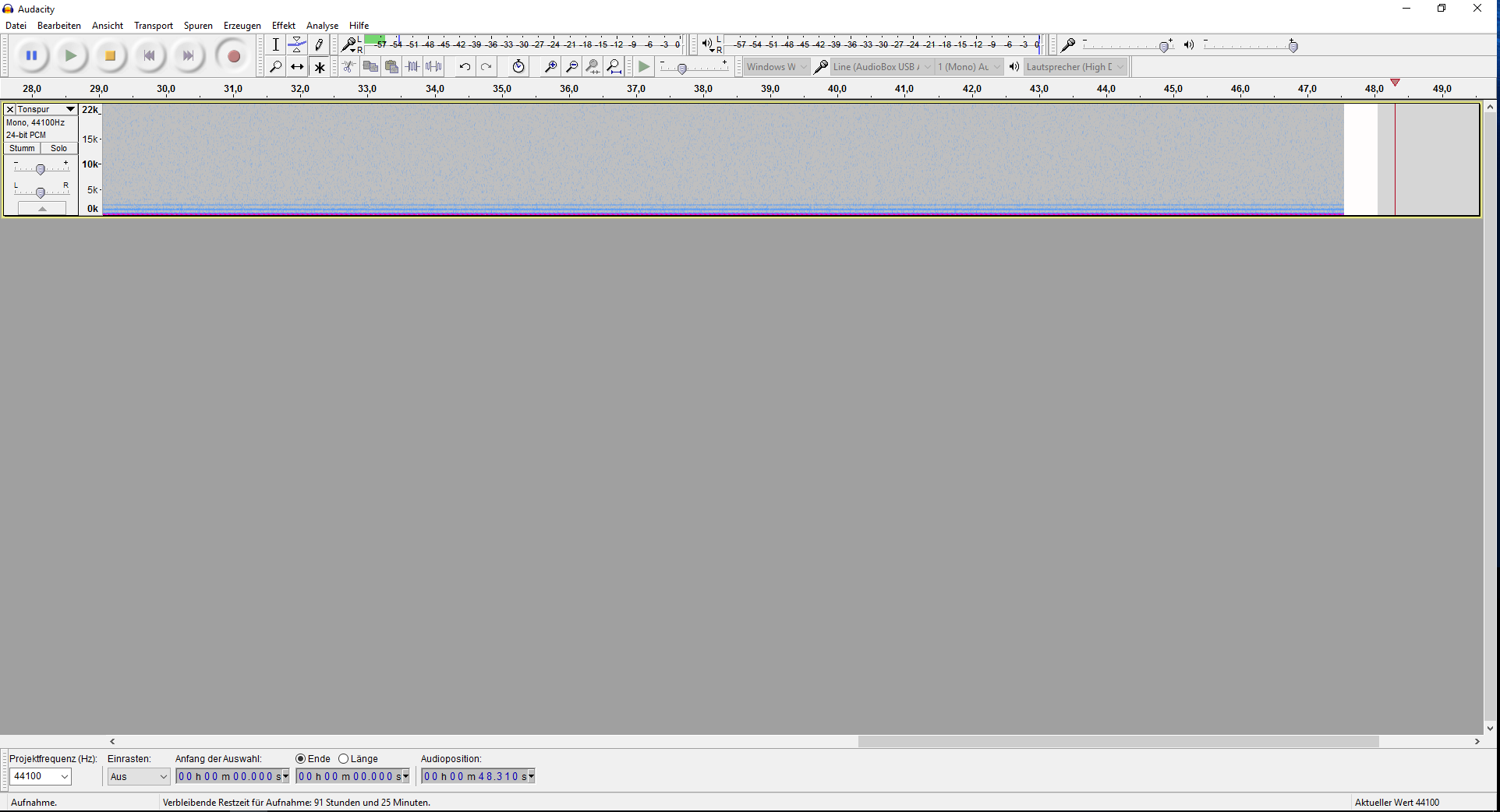 This screenshot from Audacity (click for full size) shows a single audio track that was recorded without playing music. In the high frequency region an unstructured very low noise level can still be seen. However the light blue dots correspond to amplitudes smaller than -100 dB. At low frequencies increased noise can be measured, though the magenta amplitude still corresponds to signals smaller than -60 dB.

Before starting a recording session the songs have to be converted with the PSID64 tool and transferred to the C64 e.g. by putting them on the SD card for the 1541 Ultimate. To prevent lost time it is recommended to check the noise floor in the spectrogram view once before starting. The song length from the HVSC database is a rough estimate and not always correct so it is mandatory to listen to each song at least once before recording. Also the volume varies between songs and the gain has to be adjusted.
Now the recording can begin.

Depending on the time a song was composed, the kind of song or the composers choice a song was written to be played on either an older SID 6581 or a newer SID 8580. Respecting the difference the C64 has to be changed between an old and new model (C64 II) according to the given SID information in the songs. To reduce these efforts I recommend to use a Stereo-SID extension that supports both SID types. The SIDs can NOT be exchanged directly on the C64 board. There are several solutions available. Currently I can recommend the solution by Henning Bekel. The notable advantage is the separated power supply of the SID chips that reduces noise from the video chip as well as the remaining C64 board. There are other solutions available though one has to check the actual implementation carefully as it varies greatly. I can greatly recommend SIDFX as well. However it was limited to 400 boards and is currently only available in used condition.
Specifically the with the SID 6581 each single SID chip sounds very different. A priori it can not determined which SID 6581 fits to which song. However composers such as Rob Hubbard, Ben Daglish or Martin Galway obviously did not used five different C64. With a little experience it is possible to find a SID that has a fitting playback characteristic. In some cases there are recordings available that have been acknowledged to sound correct by the composers.
The later SID 8580 sounds different compared to the SID 6581. In the 8580 'bugs' were adressed where playback of digitized sound is nearly muted. Also the analog filters are much more precise and direct. The revisions of the 8580 have nearly identical playback characteristics. Primarily noticable is their 'brighter' or 'darker' timbre. Regarding the nearly muted digital playback a workaround called 'DigiFix' is available. However it is not recommended. Instead choose a SID 6581 in this case.