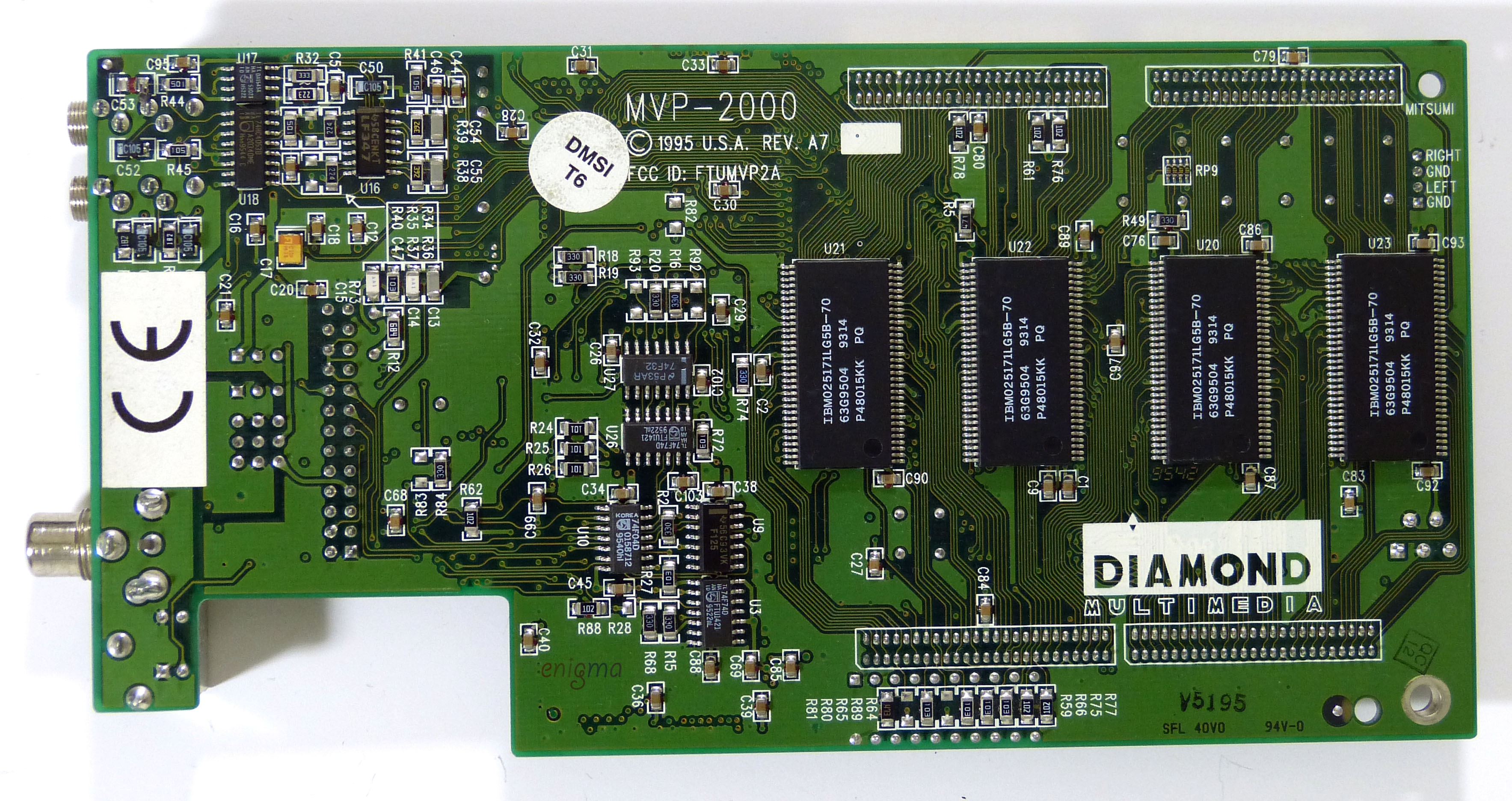 The Motion Video Accelerator MVP-2000 comes in a simple white box with a sticker identifying the product on it. It provides Hardware Acceleration for MPEG-1 video and audio decoding. For video the C-Cube CL450 chip is used which is the first MPEG-1 hardware decoder solution.
The chip features:
The C-Cube CL450 is the world's first single-chip MPEG video decoder. It is designed to provide full-motion video capability for costsensitive consumer electronics products. The CL450 decompresses constrained-parameters MPEG bitstreams (typically SIF resolution) in real time. SIF resolution is 352 x 240 pixels at 30 Hz or 352 x 288 pixels at 25 Hz, with typical compressed data rates of 1.2 to 3 Mbits per second.
Audio gets decoded by the Texas Instruments TMXG320AV100PBM digital signal processor that is capable of decoding MPEG-1 Layer I and Layer II audio to 16 or 18 bit PCM. The bitrate may be up to 15 MBit/s in bursts.
The card employs an additional IBM ViP 905 Scaler chip that is able to scale up to 1280x960. The same scaler chip was used on the Matrox MediaXL extension for the later released Matrox Millenium. Also other photos of the MVP-2000 show extension boards with a S3 Vision/VA 86C422-P as scaler chip.

The driver that is included with the boxed card supports Windows 3.x. It has support for MPEG-1 video file playback, Video-CD/CD-i playback and output from Video-In by using Overlay through the MCI interface. Video functionality in Win 3.x requires also the installation of Video for Windows 1.1e. Hue, Brightness and Contrast can be tuned. See the following video for further impressions.

The MVP-2000 accelerators driver supports Video-CD, MPEG playback and Video-In displayed through the S3 Vision968s overlay functionality. One accelerated MPEG Video and Video-In can be shown at the same time (dual video). Multiple parallel MPEG streams are not supported. Recommended playback resolution for fullscreen playback is 1024x768 at 64K colors. According to the readme for Win3.1 line 203 ff. by default scaling for truecolor (24 bit) modes is disabled and has to be enabled manually by adding NoVideoSizeLimit=1 to the [System] section of STLTHMVP.INI. In case of system bandwidth limitations in truecolor mode you may experience lockups. In such case remove the line again or change it back to NoVideoSizeLimit=0.
It is generally recommended to consult the readme when using such hardware on early systems.
Notes: Modern videos can be converted to MPEG-1 with TMPEGENC (Direct Download). Tests show that the driver for the MVP-2000 extension renders only 240 lines vertically even when fed with e.g. 352x288 25 fps streams. I also noticed that the maximum accepted resolution is 368x240 for 30 fps content. I was not able to test the actual maximum bitrate as my 486DX2-66 system can not deliver a permanent rate of more than 3 MBit/s. For high bitrates it looks like the decoder chip needs longer for decoding a single frame resulting in stuttering and dropped frames in the live output. Typically a setting of 1.2 MBit/s complies with Video-CD standards and quality increase from higher bitrates is hardly visible at the source resolution of 368x240. For Audio I set 224 kbps Stereo 44100 Hz, MPEG-1 Audio Layer II.
Before encoding it might be wise to prepare a 4:3 area of the source video by crop/resize to 368x240. In TMPEGEnc use then '1:1 VGA' for Advanced/source as well as '1:1 VGA' for Video/Aspect Ratio setting.

Stealth 64 Video VRAM Driver package
Despite the naming this package it includes driver archives not only for Win9x but also for earlier operating systems. Only the Windows 3.x driver includes support for the MVP-2000 video extension (968214xa.exe Win 3.x v2.14). The latest Win9x driver for the Stealth 64 Video in this package does NOT support the MVP-2000 accelerator.

Press article from BUSINESS WIRE on the introduction of the MVP-2000.

Photo of a Diamond MVP-2000 accelerator from an external source. Notable the IBM ViP 905 scaler is replaced there by a S3 Vision/VA 86C422-P.